It does this using the following endpoints in AWS’s ApplicationAutoscaling API:

The action1 creates a scheduled action2 on the scalable target that:

The scheduled action has a name that:

To do this, it uses the following endpoints in AWS’s ECS, Lambda and RDS APIs:

First, identify or create an ECS service, Lambda function or RDS cluster that you wish to manage using Application Autoscaling.

Finally, create a scaling plan for each entity.

Add the Update Application Autoscaling Settings action to a rule.

Select a service namespace for the action. This will be one of the following:

Next, set the maximum and minimum capacity. The former must be higher than the latter. 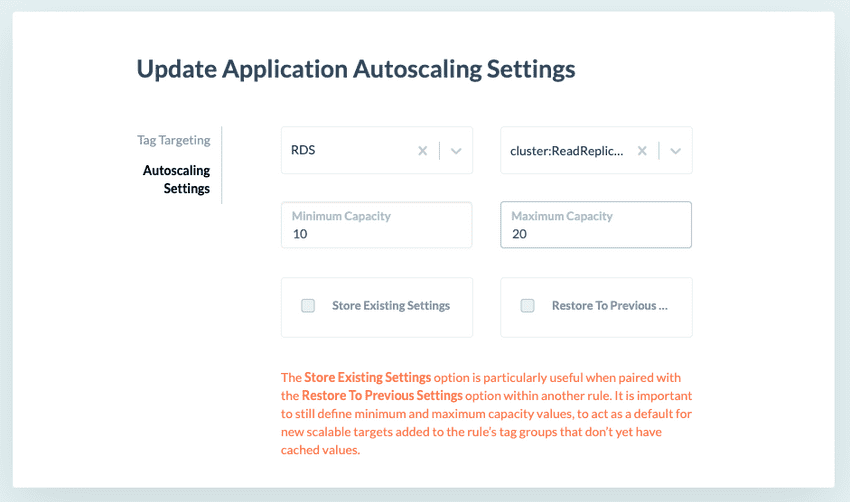 Click Tag Targeting and select one or more tag groups to target.

The Matching Supported Scalable Targets window will show all scalable targets that match your tag group or tag groups.

The targets that match your selected scalable dimension (e.g. rds:cluster:ReadReplicaCount) will be highlighted in green.

Click Autoscaling Settings to return to the previous window.

You can either leave both options unticked, or tick one of them.

If you tick Restore To Previous Settings, then when the action runs, GorillaStack will check for a previously stored record for each scalable target. If the record exists, it will rescale the target to the minimum and maximum capacities stored in the record instead of to those specified in the action. Minimum and maximum capacities must still be specified in the action as a fallback for when a stored record does not yet exist.

Endnote 1: The ‘action’ is the action you create in GorillaStack

Endnote 2: The ‘scheduled action’ is the entity that the GorillaStack action attaches to the scalable target in AWS